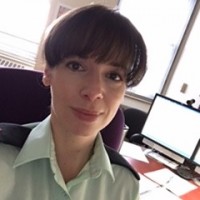 Born at CFB Lahr, Germany, Major Nathalie Auger grew up in a military family that was posted to Germany, Quebec City, Halifax and Ottawa. Interested in a military career, she joined the Reserve Force in October 1996 and was employed part time throughout her last year of high school and first two years of university as a Medical Technician with 28 Med Coy (now 28 Field Ambulance) in Ottawa. She joined the Regular Forces in June 1999, after which she graduated from the University of Ottawa with a Bachelor’s Degree in Science of Nursing in 2001.

She has deployed to Afghanistan on three separate occasions: once to Kabul and twice to Kandahar. In 2005, Maj Auger had the privilege to be nominated and selected as the Nurse Sentry for the Remembrance Day ceremony held in the National Capital.

Major Auger has two wonderful children and seven “bonus” children with her current spouse, whom is also a CAF member within the Canadian Forces Health Services Group.